You wouldn’t think walking a beat as a New York Police Officer would be the precursor to becoming a successful entrepreneur in the promotional products industry. Meet Cliff Stack, owner of By the Shore Promotions, who began his career as a New York Police Officer in the mid-1970s. While he served the people of New York, he earned his business degree.

After earning his degree, Cliff was recruited to join Xerox. Xerox with its world renowned sales training provided him the motivation to achieve great success. He was responsible for Sales and Sales Training during his tenure.

Over a 7 year period, Cliff worked for 3 of the largest promotional companies in the U. S.; at one time managing 70 sales representatives. Armed with Xerox training, he was positioned to take his sales teams to great heights. However, he was stymied by personnel departments hiring mostly “order takers” not salesmen. Undaunted, he put his sales teams through the “putting customers first” Xerox sales training but, unfortunately, with minimal success.

Disillusioned with corporate world, he launched his own company, By the Shore Promotions, in 1999. Beginning with one customer, he added new business using the sales and marketing methods based on his Xerox training. His first order was a 50,000 piece calendar with reorders every year since the first one.

To broaden his customer base, Cliff asked a friend for a referral to her company’s management. The executive meeting and test project went so well that he was introduced to other departments in the company. Within a year, decision makers throughout the company relied on him to solve their promotional needs. As a matter of fact, whenever anyone left the company, they introduced their replacement to Cliff. This customer, with 30 contacts, is still a customer of By the Shore. His first full year in business generated $1,000,000 in sales.

In the early years, Cliff was very aggressive finding opportunities to meet new prospects for his new company. By the Shore Promotions grew quickly, adding employees and a storefront. He sought prospects anywhere and everywhere. He knocked on doors just to get an intro to the company. Unfortunately, today, customer interaction is mostly e-mail, text or cell phone.

By the Shore’s sales grew but so did business complexities, i.e. employee issues, maintenance, property upkeep, business costs, etc. So Cliff decided to downsize the company to make it more manageable and less stressful.

Having downsized, By the Shore didn’t have the buying power it once had. Challenged by competitive forces, Cliff sought a way to even out the playing field. He heard about Universal Unilink which would bring him pricing leverage from favorite suppliers such as Dickies, BIC, Norwood, Charles River and Prime.

In 2003 he joined Universal to help him compete for uniform and promotional programs. Being a Universal Unilink Member provides competitive pricing and many more advantages. Leveraging his membership helped keep his company manageable while delivering great products and profitability. One of Cliff’s key principles is to “make sure you know the cost so you can make a profit”.

He offered the following as key factors to his success:

Whenever Cliff visited a customer, he usually came away with an order. Visits spark interest; it gets customers thinking. By the Shore is comprised of 60% wearables and 40% promotional products.

He constantly looks for opportunity to help customers build their brand and business. Knowing that signage is a great add-on, Cliff promotes Showdown Displays to his customers. When a customer’ requests polos for an event, he asks, “Do you need a booth”, “signage” and “giveaways”? His goal is to be his customer’s “problem solver. Making your customers aware of solutions, creativity and innovative products your firm can provide is critical to a profitable, long term relationship and a company’s success.

This belief has moved By the Shore Promotions from product selling to providing solutions. For example, in a top account, Cliff was asked to coordinate an important appreciation program. He designed the package including a CD with heroic songs with a custom cover, folder, and personalized thank you letter” delivered nationwide. Cliff produced and coordinated the entire $135,000 project. The project was a HUGE SUCCESS.

His current business strategy and seamless operations enables him to manage his business, play golf twice a week and still meet the demand of his clients. During the winter, he and his wife, Marlies, can holiday in Florida for a couple of months without missing a beat. Cliff is connected to his business wherever he may be. It has become a business to fit his and Marlies’ lifestyle. Cliff asked the fundamental question “Isn’t this where you want to be after all these years?” 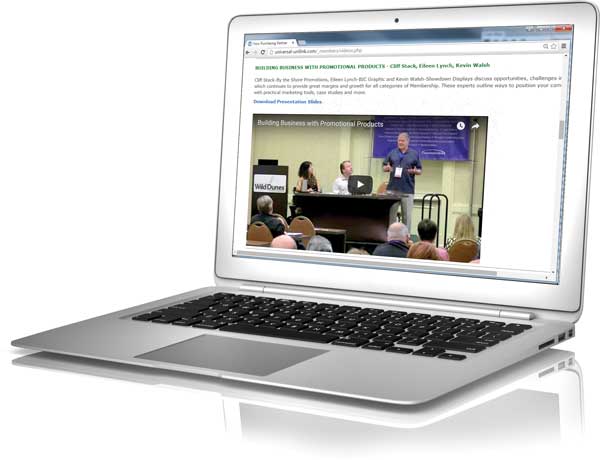 Cliff shared valuable prospecting tips in a panel discussion at the 2015 Business Development conference titled, “Building Business With Promotional Products” with Eileen Lynch from BIC Graphic and Kevin Walsh from Showdown Displays. You can watch the replay in the video library on the member site.