Member Randy Mckernan’s introduction to the world of uniforms and corporate apparel began thirty years ago in a chance encounter on a plane with a sales manager for a major manufacturer. The two hit it off and Randy says that “some time later I was looking for a job and they were looking for a rep and we put it all together.” After gaining uniform program sales experience with a couple different uniform manufacturers, Randy began to realize that many times, the customer was not always served. He recalls, “I saw the customer service mistakes big companies I worked for were making and thought I could solve a lot of those. The bottom line is that it’s much cheaper and more valuable to keep an existing customer than it is to go find a replacement. A big company can do anything they want to make a customer happy, they just don’t have the systems available to them to make it work. I thought I could do better.” 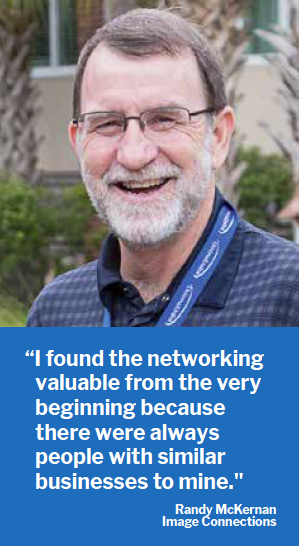 In 1999, Randy founded Image Connections in a home office. Randy remembers, “All I wanted to do was sell uniforms. That’s all I had ever done. It was a big leap of faith. I got started by setting up a phone line and a fax number and started going out, banging on doors, the same way people have been doing it for hundreds of years.” The hard work paid off and soon Image Connections had customers.

The next year, Randy joined Universal Purchasing Association after hearing of the group from a sales rep with a Preferred Supplier. While better pricing was a big selling point initially, Randy soon learned that the network available to him through the annual member conference and other member meetups would help Image Connections grow. Randy states, “When I was younger and newer at being self-employed, I was looking for answers for everything. I found the networking valuable from the very beginning because there were always people with similar businesses to mine. I could relate–we could commiserate–we could brainstorm a little bit. I now have people that I can call anytime. If I have a particular issue I might call a particular person and say ‘how do you solve this?’ These are people with Universal Unilink that I have met over the years that I am comfortable calling—even though we may compete somewhere down the road, we have a common bond in helping each other grow our business.”

The McKernan’s home was soon bursting at the seams with the coming and going of merchandise. The growing business’s initial expansion was a self-storage rental space. Randy recalls, “The UPS driver would get the key to my unit if I had a shipment for pick up. He’d also drop off shipments at the storage unit using the same system.”

Creative solutions like the self-storage rental allowed the company to continue to grow, but Randy soon recognized that using contract decorators limited his ability to provide the level of service he wanted to provide. “Contractors don’t want to service programs with small fill-in orders; they want large orders to keep the machines running.”

Another milestone in growth was the purchase of embroidery equipment which Randy set up in his garage and learned how to operate. “This move gave me the capability to handle the type of programs I was used to selling and to service the customer well.”

Less than a year after getting the embroidery equipment, Randy realized he didn’t want to run it every night–an important transition point in any start up business. Randy recalls, “I rented some warehouse space, found somebody with experience that could run it, someone that was flexible enough for me because I didn’t need someone for 40 hours a week to start with–but it didn’t take long before we were running full time.”

This transition also brought with it a diversified customer base. Says Randy, “Once I had equipment to keep running I expanded beyond my original customer base. I became indifferent to whether I was embroidering a uniform or a corporate polo shirt. They both use embroidery and the same equipment. Once I had the equipment I expanded from uniforms to corporate apparel. From corporate apparel it was a natural progression to supplying customers with promotional products as well.”

Randy had learned the diversification lesson during the economic woes of 2001. “It was alarming. I suddenly realized that there are certain types of customers that may not be a good fit for me. At the time I had a small commuter airline customer and I swore if I ever got my money from them I would never call on another airline.” He continues, “I now have a diverse group of customers—from national Parks to Fortune 500 companies to local businesses. The mix works well for me because when one area is doing poorly, the other areas are doing OK. They are not all down at the same time.”

Those lessons have paid great dividends and now Image Connections has thirteen full time employees—a far cry from the days of working alone in his garage through the night. Several employees have been with Image Connection for ten+ years. Randy attributes their longevity with the company to the application of the Golden Rule. “Treat people like you want to be treated. When we have success we share it. I know the most important thing in their lives is not coming to work for me every day. You have to keep that in perspective.”

One of those full-time employees is a programmer tasked with maintaining Image Connection’s online presence. “Initially, ImageConnection.net was designed as an online catalog for existing and potential customers to see what we had to offer. Our first real web store, ProGolfShirts.com, was designed as an internet sales venue for corporate apparel. Because it was successful in generating new business, leads and opportunities that we would not have otherwise, we went back to ImageConnection.net and enabled it to perform as a uniform web store. We are serving two different markets and the approach from a marketing standpoint is completely different for each. Sometimes it’s hard to remember that.”

In addition, Image Connection expanded to provide custom, dedicated “company stores.” Randy explains, “For our uniform program customers, we can set up a web store specifically designed so their employees order only those products authorized.

This also works well for programs with uniform allowances. Our customer specific web stores are designed to keep track of the dollar amount allocated for each employee so the customer doesn’t have to do that. We have customers and prospects from all over who are specifically looking for that capability.”

Randy has made sure that if customers are looking for his services, they will find him. “We use Google AdWords a lot. We also work hard at getting free web traffic through search engine optimization as well but that’s harder to measure. There are many terms that people search for where we appear in the search results right along with the biggest guys in the industry. That’s gratifying. I do as much as possible to stay on top of it, but Google is both a help and a hindrance to our business. It’s difficult to stay up to date with all the constant changes that Google makes to their system.”

Thirty years of change and adaptation mark Randy McKernan’s journey in the uniform and corporate apparel world. The ability to respond to the ever-changing environment is a key to the growth that Image Connection enjoys today. Randy concludes, “This business is like a marriage. To make it work you have to be prepared to change and grow. What you see working today may not work tomorrow. The basics will always be the same but customers change, contacts change, businesses change, priorities change. For me, building in the diversity has been a great way to maintain sanity.”

“I found the networking valuable from the very beginning because there were always people with similar businesses to mine.”