The laundry industry is considered a mature market, so the launch of a new laundry is always newsworthy. When the owner’s methods are a bit unconventional, interest in the outcome is even greater. We are pleased to report that Premier Linen and Supply of Port St. Lucie, Florida will mark its second anniversary on January 1, 2016.

Owner, Joe Bozzo recently talked with us about his path to operating a start-up rental laundry in a fast growing market. While a regional manager for Stanton Optical, responsible for opening new stores across the country, Joe was approached by a friend and long-time employee with a national laundry. He asked Joe to partner with him to establish linen rental businesses in the Manhattan and South Florida markets. The friend took Manhattan and Joe established the Florida branch operation. As one of the fastest growing area in the US, South Florida proved to be an ideal location. And it isn’t just retirees; manufacturing, hospitality and other key segments are experiencing double digit growth. The business grew quickly as Joe built relationships with customers while subcontracting processing to a wholesale industrial laundry. Soon Joe bought out his Manhattan partner, assumed total ownership of the South Florida operation and changed the name to Premier Linen & Supply. With his previous employer, Joe’s business acumen enabled him to open and establish new optical stores in record time. His performance at Stanton was so impressive that his former boss, Andrew Laskaris, left the company to work with Joe as Vice President of Sales. Joe says “Andrew is a great contributor to Premier’s success. I rely on him daily.”

Joe credits the booming south Florida economy and a progressive marketing campaign with Premier’s rapid growth. Always a student of technology, he uses LinenFinder.com, an industrial laundry lead generation service as a source of new customers. He holds exclusive rights with LinenFinder.com for the south Florida region. Joe also added an aggressive SEO web campaign to generate leads. Still a novice at internet marketing, he took advantage of his father’s IT knowledge and connections to help Premier Linen create their internet market strategy and implementation. “We were able to leverage advanced corporate knowledge and marketing connections to build a successful SEO strategy and campaign. When prospects search for linen services in our area, they find us first. This translates into prospects connecting with our website.” Premier Linen’s marketing program is constantly evolving; they are currently updating their website to better align with their customer acquisition methodology. Not relying totally on technology, Joe also followed the tried and true “hitting the streets” method. He goes door to door handing out sample towels with coupon discounts. “We do everything to get the business.” says Joe. “We are in an underserved market, so there is an abundance of opportunity.” Joe adds, “South Florida’s demand for rental laundry services is growing at a faster pace than the rest of the country. This environment allows us to be selective in whom we bring on as a client. Seventy percent of our clients are restaurants and country clubs. Premier has signed eight new county club accounts in the last 30 to 45 days. The success of our first year with country clubs has compelled us to be very discerning in acquiring new clients as we integrate current customers into our system.” 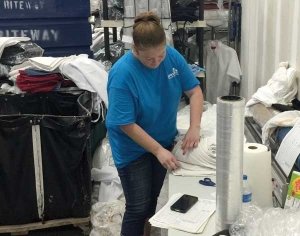 In addition to county clubs, Premier Linen successfully serves the cruise line industry. One of the largest lines became a client when Premier was contracted to service two big dormitories where staff was trained for the cruise line shows. Another major line contracts with Premier to service 20,000 pounds of linen per ship while the cruise ship performs maintenance on onboard laundry equipment one to four times a year. Recently, a third major line approached Premier to process linens in South Florida and Portland, Oregon. “We obviously didn’t have an operation in Oregon but Andrew, our VP of Sales, said, ‘Why don’t you call Universal Unilink to see if we can partner with another Member?’” Universal Unilink introduced Member Ken Kaveny of Sage LLC to work with Premier to service this client on opposite coastlines. Adds Joe, “From time to time cruise line customers ask us to service them in their other ports of call. That’s when we call Universal Unilink for help.”

Universal Unilink also assisted Premier in finding the right Preferred Suppliers. ”We were looking for a textile supplier that we could rely on. Universal Unilink introduced us to Venus as well as several other excellent linen suppliers. Scott Sunday, our Venus representative, has been great. In terms of fairness and understanding, Venus has been a true partner to us.” Though Premier Linen’s progress has been positive, it is not without the occasional trials. In one such instance, a national laundry’s local operation picked up thousands of dollars of Premier Linen’s inventory from a former client. The competitor’s manager refused to talk with Joe about returning the product. Once again, Joe called Universal Unilink for assistance. The Universal Unilink team went right to work to devise a strategy that resulted in the return of costly inventory. Joe adds “We are extremely happy with Universal’s support on the situation. The Universal team has been extremely beneficial.”

The future is bright for Premier Linen & Supply. From marketing to production, their unique business plan is working well. Outsourcing production enabled this fast growing company to fix processing cost and focus on growth. “Going into our third year, we will continue to leverage the strategy that has served us well. We will also continue to look to Universal Unilink and its Member companies for guidance and resources as we present additional services to our customers. Our partnership with Universal means the world to us. Number one, we need people we can rely on and trust, and two, Universal has the industry experience and resources to help us bring greater levels of service to our existing and future clients.”