Health Mats Company is one of the largest independently owned mat rental companies in the Philadelphia area servicing customers in New Jersey, Delaware and Maryland. While their customer base is vast, owner Vince DelRossi explains that it started with humble beginnings and was built by earning their customers’ business and building relationships.

Vince’s father and namesake, Vincent DelRossi founded Tiny Tikes Diaper Service in the late 50s gaining market share by providing twice per week deliveries rather than weekly service as offered by the competition. Vince started in the family business serving in a variety of roles but he excelled at maintaining and repairing washers, boilers and other equipment even as a teenager.

The business thrived until the arrival of disposable diapers. Almost overnight, the home diaper service customer base collapsed. Vince’s father responded with a new innovation for their diaper service customers—cotton latex mats. Recalls Vince, “It was a terrible mat but his idea was to rent it to his diaper customers. When diaper customers were visited we would change the mat. He came up with the name ‘Health Mats’ which I thought was dumb – I thought the whole concept was dumb but I was only seventeen at the time, what did I know?”

Vince’s father attempted to keep the diaper business moving forward by merging with other companies but by 1972, Tiny Tikes came to an end. Although it was only making $300 per week in sales, Health Mats became the business focal point.

Vince remembers, “By that time I was 21 and working as a stationary engineer in an industrial plant operating boilers and things of that nature. My dad called and asked me to join him in the mat business. I said ‘I’ll do it but I want 50% of the business.’ which was making very little at the time. I had had just gotten married and had a child on the way.”

After father and son joined forces the company grew but disagreements came up about how the company should be run. Vince eventually said, “Dad, one of us has to go. I will go back to my job as a stationary engineer.” To his surprise, Vince’s dad volunteered to step away from the company. With sole control, Health Mats grew substantially. After a few years, father and son attempted to work together again but operational disagreements returned. Vince bought his father’s share of the business and has not looked back. 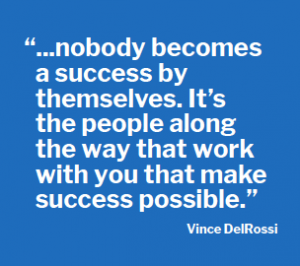 Vince credits an understanding of accounting and finance that helped the business multiply quickly in the early years. Additionally, Vince’s mechanical background as a stationary engineer enabled him to maintain and install equipment as needed which saved the new company money. Vince was also selling and working nights and weekends with wife Nancy. States Vince. “I delivered mats, Nancy cleaned them with a vacuum cleaner and a floor scrubber and our son would ride his big wheel around the building.”

While working around the clock was not ideal, it did catch the attention of people that could help the growing company. One of Health Mats’ biggest suppliers at the time was a vinyl-backed mat manufacturer run by Leon Schwartz. Vince had purchased mats on credit and Leon dropped by unexpectedly to see the operation. “When he saw that Nancy and I were hard at work and I didn’t have my feet up on my desk, he gave Health Mats unlimited credit and became one of my most influential mentors. I worked with him for many years.” 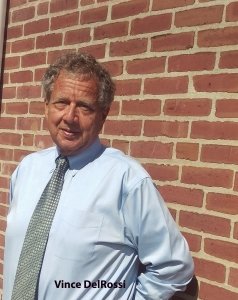 Other breaks came in the form of referrals. In one instance a sales rep form Golden Star gave Vince a lead on a supermarket that needed mat service. That led to a contract with the entire chain of 300 supermarkets. In turn, that success led to contracts with other supermarket chains.

By this time Vince had long given up many of the roles he played at Health Mats and focused on sales and building relationships. “I should have hired an additional sales person sooner, but I was stubborn. I often wondered if I should have focused on sales earlier and hired someone to perform maintenance and other duties. Would we have grown faster? But it all worked out and I am happy now,” he concedes.

Reciprocal relationships with customers continue to shape the direction of the business. One of Health Mats larger customers, DuPont, requires their suppliers to participate in their safety program. Vince reports, “They taught us a lot about safety. Not only have we put those ideas into practice in our facility but we have turned it around and made it a key part of our marketing program.“

Kris Smith, Marketing Manager for Health Mats, agrees. “Health Mats is transitioning from being a commodity mat rental company to a Partner, empowering our clients with a positive healthy environment for their employees and customers. That’s why we have redesigned the Health Mats logo to include the tagline ‘Walkway Safety Solutions.’ In addition we reinforce our mission with the message ‘Keep your company clean, safe and healthy!’ which we include on all of our customer communications.” 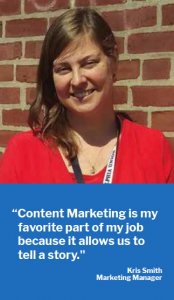 She continues, “’Clean’ is easy to understand from a dust control point of view. Our mats have always done a great job with that, but we are adding janitorial supplies to our product mix to reinforce the message. ‘Safe’ describes the inherent attributes of our mats to prevent slips. We are taking that even farther by promoting the new Wet Step mat from Mountville Mills with built in antimicrobial properties, which is designed to prevent slips in areas like pools, showers and locker rooms. ‘Healthy’ takes us in a completely new direction by offering first aid cabinets service for our customers.”

In addition to traditional first aid supplies, Health Mats is going further by offering defibrillator leasing. Customers will also be trained in CPR and how to use the defibrillators. Because defibrillators and CPR training are highly regulated, these functions will be administered by a licensed third party. For the customer, it will be just another line item on their monthly statement.

Vince says “The timing on this is great for our customers and us! Impending regulations will make first aid cabinets a requirement and this is an easy solution we provide. The defibrillators take the safety aspect to the next level. We have them in our plant too. I bought them just in case I ever needed it.”

Spreading the word of the Health Mats mission will be accomplished with a coordinated campaign of billboard advertising, new truck graphics and a revised web site. Kris notes “We are working with Preferred Supplier Fortune Web Marketing to redesign our current site, make it mobile friendly and easily accessible for customers.”

She adds, “Content Marketing is my favorite part of my job because it allows us to tell a story. It’s not just a story of the company but also our products, our service and our process. The general public has no idea what our business and industry is all about. They may be searching for what we offer and content marketing allows us to make that connection and tell prospects not only what we offer but how our industry works and why they should consider us.”

How is the newest direction for Health Mats perceived by the customer base? When long-term relationships are nurtured and the needs of the customer come first, everything else falls into place. Vince explains “We were having lunch with one of our best customers. They were asking us what we had in the works and we were excited to tell them of our plans. When they found that we were looking into first aid and CPR they volunteered to be a pilot. It’s all about the relationship.”

Vince concludes, “I will freely admit, nobody becomes a success by themselves. It’s the people along the way that work with you that make success possible.”

“…nobody becomes a success by themselves. It’s the people along the way that work with you that make success possible.”