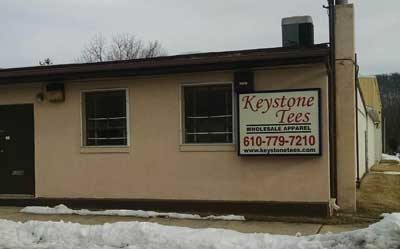 Don Abramson graduated from college in 1975 with a degree in accounting and the realization that he was not interested in being an accountant. What follows is a story of how a college graduate starts an apparel business in the bedroom of his parents’ home and builds it into a thriving venture that has served customers nationwide.

When the recent grad returned to his Reading Pennsylvania home, Don and his parents became outlet store “rack jobbers” by obtaining irregular t shirts and briefs from Don’s uncle who was in underwear manufacturing. The business had some success but in a couple months Don and his parents began to see a need for wholesale blank t shirts. After getting and filling a few orders, they decided that this was an opportunity for a new venture. Keystone Tees was off and running.

The Abramsons began their shoestring marketing campaign for more business by searching for blank t shirt customers from cities cross the country in the phone books at the local public library. They used rolls of dimes to make photo copies of listings of screen printers and embroiderers and sent out hundreds of their marketing flyers. Orders were shipped in used boxes they obtained from department stores.

By 1976, the orders were coming in on a regular basis and the Abramsons discontinued the outlet business to concentrate full time on the growing wholesale blank distribution business. Don bought a 20 x 100 foot building to move the inventory out of the bedroom in his parents’ house.

More trips to the library, more copies of phonebook listings, and more flyers mailed. It was a winning formula and the business exploded. “By 1979 we were literally busting at the seams” Don recalls. Keystone Tees added eight employees and by 1980, the business moved to the current 27,000 square foot location.

By the mid 90’s, the business environment began to change. NAFTA had begun and the blank wholesale business faced more competition from across the borders. Don had to choose: either borrow money to expand even more and become a major wholesale supplier with his own brands or try a new direction. Further expansion into the wholesale blank industry seemed to be risky so Don decided to shift gears and Keystone Tees became an image wear direct seller. Since making his decision, Don has seen many of his competitors in the wholesale blank business either close up shop or get absorbed into larger entities.

Don used his years of experience with sourcing quality shirts, sweatshirts and other apparel, and contracts the decorating to trusted businesses that have a proven track record of delivery quality service. With this model, Keystone Tees is able to concentrate on their customers and make sure the finished products are what they are expecting.

What Sets Them Apart 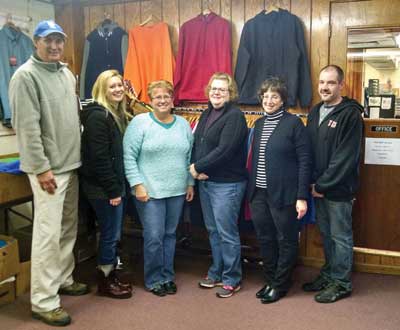 Getting the art and design right is a huge part of the Keystone Tees value proposition. Don credits Ellen, his wife of 38 years, with taking care of the quality control. Don says “Ellen is running the customer service and supplier part, negotiates with suppliers, she does the ordering, she talks to customers. She works closely with the artists; they almost sit on each other’s laps. She’s involved all day long.”

That customer involvement is a big part of Keystone Tees’ success. Don says, “You have to be very careful about the process and the details. Logos, colors, bleeds, is it too big, too small. If you print something wrong, if you misspell a word, it’s junk. If you print 1000 shirts and you misspell a word, it’s worthless. Even if you get a sign off from a customer, they still get upset.”

“This is especially true in the apparel sector of the business. Hard goods have a designated area for imprints but apparel has so many variables, you really need someone that knows what they are doing. A lot of people think they can get into this business because it’s easy, but there are so many things that can go wrong with the process. You have to know what looks good and understand the customer and communicate with them.”

Don’s wife Ellen is not the only family member that has contributed to the success of the business. Don and Ellen’s three children all worked in the business growing up and now have their own careers. Don’s parents continued to be a major part of the business from the start. Don’s father Morris was an integral part of the business until he was 90. Mother Lillian also contributed until her early 90s. When no longer able to come into work, she would tele market from her home. Morris passed away at 94 years old and Lillian is now retired at 97.
In addition to their contribution to the Reading business community, the Abramson family has long been involved in the local Jewish community, Hillel, FIDF and other Jewish humanitarian organizations.

Serving customers for forty years is an important milestone for any business. Meeting challenges with creativity and making the hard choices to change with the times have contributed to Keystone Tees’ success. While Don and Ellen’s children will not be joining them in the family business, the Abramsons and their seven full time employees are looking forward to serving their customers’ image apparel needs for many years to come.