Throughout recorded history and prior there is a byproduct of our existence little spoken of but always present: wastewater. As history progressed, and cities and industry have developed, wastewater’s impact on our lives has become greater.

The time when wastewater started to show a greater influence, to the detriment of society, started during the industrial revolution. Cities were growing and the need for sewer systems became apparent, and treatment of that waste a priority. As heavy manufacturing industry grew, it became more apparent that their wastewater was affecting the entire environment. 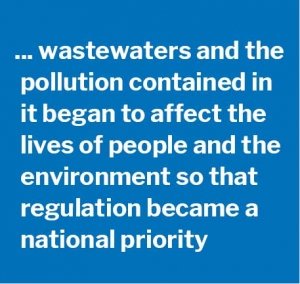 The laundry industry utilizes a high volume of water in their processes, and thus a high volume of effluent, containing potentially unacceptable waste elements in that effluent. Industrial laundries can serve clients ranging from heavy industries with oily and greasy soils, to medical facilities, to restaurants, to printers processing solvent laden towels, making their wastewater possibly the most unique and unpredictable from day to day, when compared to other effluents.

Industrial wastewaters and the pollution contained in it began to affect the lives of people and the environment so that regulation became of a national priority, first as the Federal Water Pollution Control Act of 1948. This act was then reinvented in 1970 under the National Environmental Protection Act creating the Environmental Protection Agency under which the Clean Water Act (CWA) was promulgated. The CWA is the legislation that created the laws and regulations under which Publicly Owned Treatment Works (POTW) are regulated as to their discharges to the rivers and streams in the environment.

The CWA gives the local POTW the responsibility to set in place programs for regulating industrial wastewater discharges to the sewer through a permitting system. There are some industries whose wastewaters are so toxic that they must pretreat their wastewater to meet federally mandated standards prior to releasing the effluent to the POTW. Typically, if not federally regulated, wastewater permits are issued via the Sewer Use Ordinance of the city in which the company operates; in smaller communities the state will take this responsibility. Working through CWA and EPA guidelines the local or state regulatory authority develops limits for such factors as oil and grease, heavy metals, organic compounds, biological oxygen demand (BOD), total suspended solids (TSS), flow, and pH, and others, and then issues discharge permits based on those limits. The local authority has the ability to issue a discharge permit to regulate a facility if the authority can show it is a detriment to the local POTW operation, despite the Sewer Use Ordinance. Many factors go into the issuing of discharge limits. Perhaps the greatest factor is the receiving stream of the POTW discharge. The more pristine the body of water, the stricter the limits.

Once issued a permit, the local or state authority will require the sampling and analysis of the effluent wastewater coming out of the facility. If it is found to be compliant no action will be taken; however periodic sampling and reporting requirements will still have to be met. If the facility exceeds the discharge limits, it will be issued a notice of violation (NOV). This NOV will require a response from the industry describing the reason for the violation and the corrective actions to be taken to avoid re-occurrence. Typically a resample will be required. If that sample fails as well another NOV will be issued requiring the same information and action plan. If three NOVs occur in a three to six month period, the facility is considered to be in significant non-compliance (SNC). SNC results in the facility identity being published in the local newspaper as a culprit operation. SNC may also occur immediately if the exceedance is of magnitude considerably higher than the limit (typically 33% over the limit).

At this time the state or local authority may place the facility on a compliance schedule and require a written plan with deadlines of how the operation will come into compliance. They will not tell the violator how to accomplish this goal, but will require a time-line for submitting information, treatment options and implementation. Fine may be imposed at this time or at any time after the first NOV. Litigation by a third party is also a risk if the state or local authority does not take enforcement action (up to $5000/day of operation while non-compliant).

Typically, POTW limits for oil and grease or petroleum hydrocarbons drive the need for industrial laundries to install pretreatment systems if out of compliance with POTW limits. Plus, the quest for further reductions in water usage can change the equation, since water reuse systems will concentrate the soil load in the effluent making the need for a pretreatment system much more necessary.

Next in the series: A review of the current state of wastewater technology. 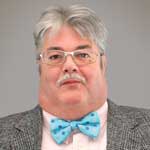